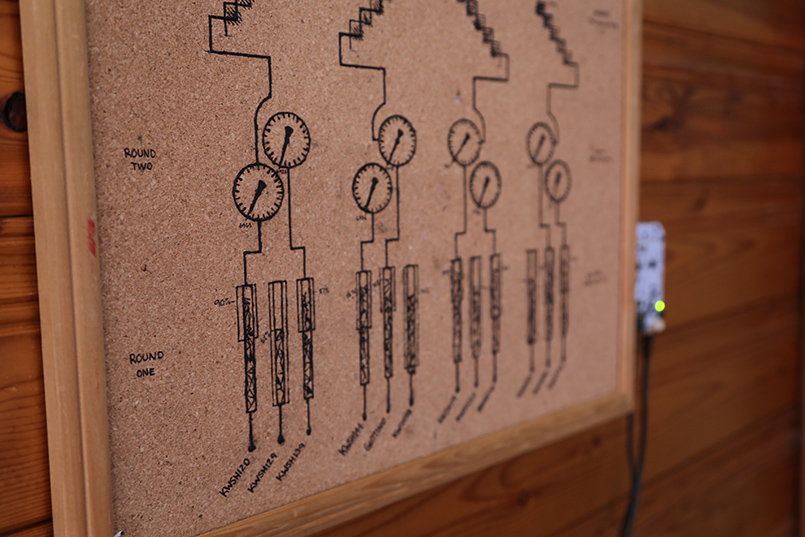 Fall Rye League is a new media artwork created during an artist residency at the Disruptive Imaginings Data Visualization Lab in Spring 2015. Using conductive paint and a micro-controller, the piece presents the statistical champion of Crop Geneticist and Breeder Jamie Larsen’s Fall Rye 2013 – 2014 Cooperative study through a touchable cork interface.

The Fall Rye League is an agri-centered bracket tournament featuring the twelve rye varieties that were a part of Larsen's 2013 - 2014 cooperative study. In the first round, the rye varieties are broken into four groups of three, where the top two performers in each group move forward to round two, and the the best of two then move forward for the rest of the tournament (this break-down was necessary to avoid any byes). The trait data being compared in each round was determined by the Agronomic Evaluations Team's Merit Assessment Tool, where Winter Survival is weighted as the most important, followed by Grain Yield, then the Hagberg Falling Number (bread making ability), and finally Percent of Ergot. Moving from most important to less important in this way weeds out varieties that perform poorly in essential categories early on.

The forms chosen to visualize each bracket of the Fall Rye data (Winter Survival, Grain Yield, Hagberg Falling Number, and Percent of Ergot) attempted to connect the numbers to what they represent. In the winter survival round, the data is shown as a bar graph filled by a crystallization pattern; the less crystallization (freezing due to winter), the better the rye variety faired. In the grain yield round, the data is shown on a classic weight scale; the heavier the better. The Hagberg falling number data comes from the time it takes for a stirring rod to 'fall' or drop through a beaker of water mixed with the starch from the rye. The longer it takes to fall, the better the bread making ability. The visualization of this data is shown as a length of criss-crossing lines, symbolizing viscosity. Finally, the percentage of ergot, a dangerous fungus that can infect rye grains, is depicted as dark grains among a series of light, healthy grain. The rye with the least amount of ergot would be the victor of the tournament.

A key consideration in the design of the tournament was the order and groupings, from left to right, to compare the twelve varieties, as the arrangement affects the outcomes quite significantly. For instance, if three high performing varieties were compared with each other, the worst of the three may be actually be better than the best of three low performing varieties. To remove this element of chance, I designed a simulator that cycled through 5000 possible combinations of the varieties with the help of Taelynn Graham, an intern in the Data Visualization Lab. From these 5000 game simulations, KWSH140 triumphed in 24.1% of the cases. Its closest rival, Guttino, fell short at 21.4%. Working backwards from the statistical champion (my apologies for the anti-climactic spoiler), the order of the varieties fell into place with a bit of finessing to insure consistent distribution.

Another aspect informing the design of the Fall Rye League was the medium in which the brackets and rye data would be visualized: conductive black paint and a Bare Conductive Touch Board. The Touch Board is an Arduino programmable micro-controller that has been designed for touch-based interactions. Paired with the conductive paint, a painted "circuit" becomes interactive when connected to any of the Touch Board electrodes. By simply touching one of the circuits, the micro controller responds with the desired output such as a sound, visual display, or kinetic movement. For the purposes of the Fall Rye League, I applied the conductive paint to a cork bulletin board and connected the touch board electrodes to the first round of twelve bracket slots. This effectively created twelve different circuits for each of the varieties that the user to can interact with.

Read more about how crop breeding works and the inspiration behind the bracket tournament-style data visualization in the blog post: Fall Rye League: Making the Cut